For whom?  Students, pupils, scholars and teachers.

Restrictions?  No, full functionality and no restrictions.

How to order?  Upload your student card and order immediately 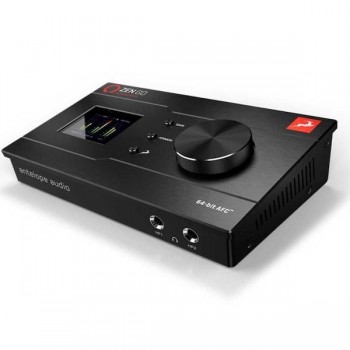 Zen Go Synergy Core is antelope's first-ever bus-powered desktop interface packed with technology found only in high-end professional studios, giving you instant access to premium sound quality even at home. The extensive library of Synergy Core analog-modeled effects lets you shape your sound with precision and character - all while monitoring instantly with imperceptible latency

The Zen Go Synergy Core narrows the gap in sound quality between artists, engineers and producers who have access to high-end studios and those who work from home. The core technologies that have put our premium devices in some of the most respected recording studios are now accessible in a much smaller size at your fingertips.

Compact yet powerful, the Zen Go Synergy Core fits perfectly on any home studio desk, whether used for recording, mixing or streaming. Its extensive outputs mean it can be connected simultaneously to different systems while drawing power from your laptop or a standard phone charging port. The portable design also means you can slip it into your backpack and easily take it with you on tours and on-location recording sessions, without sacrificing speed and efficiency.
Synergy Core Collection

They at antelope have carefully selected 37 of the most useful and sought-after effects and included them with every Zen Go Synergy Core. This free library of analog-modeled compressors, EQs, mic preamps, guitar amps and cabs, and our signature AuraVerb gives you all the tools you need to create stunning, sonically rich productions without spending extra money.

In addition to the 37 free effects, the ever-growing Synergy Core library offers over 50 more optional add-ons, including emulations of classics like Grove Hill's Liverpool and Gyratec's legendary EQs, as well as effects from other vendors like Antares Auto-Tune and Inertia's Instinct.

Want to apply Synergy Core processing while working in your DAW? Watch our special instructional video to learn how to load the real-time effects as hardware inserts


Your Review: Note: HTML is not translated!

Enter the code in the box below:

Feel free to contact us for all your questions. We are available by phone, email and our contact form.

Questions by email/contact form are answered the same day.